We spent a wonderful day at the office getting to know one of our key managers, who also put together an impromptu lunch with her team. It was great to get to know them and also a little amusing because they had a complement of vegetarian as well as non-vegetarian food. And as it turned out, all the women ate at one end (the vegetarians) and all the men ate at the other. Tracy, having been ‘mostly vegetarian’ since arriving, ate with the men that day.

After work, we had a really great dinner at the Seasonal restaurant in the Westin; a buffet of Chinese, Indian, kabobs, everything you can imagine. We had the restaurant’s version of street food, which Indians refer to as small plates of savory snacks called chaat. We had the most amazing papdi chaat that included the papdis (fried flour crispies made of chickpeas, potatoes and pakoris (fried black gram fritters)) broken up as a base with everything piled on top from some type of seed, small chunks of potatoes and tomatoes, chick peas, generous portions of curd (yogurt), mint and tamarind sauces, all topped with pomegranate. The flavors were AMAZING!

So, we were so blown away by the great taste that the waiter (remember this was a buffet) brought us some pani puri, fried crispy shells filled with potato that you add either sweet or salty liquid (chili or tamarind) to and pop them in your mouth. Really interesting! The staff were fabulous and kept bringing us interesting things to eat … I guess they were intrigued because we would try anything and exclaim wildly!! 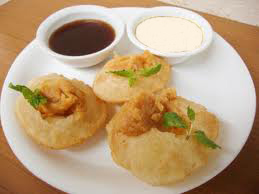 The dinner was terrific and then Tracy left for the airport to fly to Singapore and back to the US.

I spent the morning on Saturday at the Heavenly Spa, where I scheduled a pedicure and was quickly talked into a massage and a facial. How could I not? The total for all three was Rs 6,500 ($116 US).

I left for Kochi and arrived at Le Meridien where I spent the evening trying to get myself organized. I ended up in a room on the 5th floor, just down from the Fitness Center and I can’t wait to tell my sister that I actually spent an hour there this afternoon! (I have to work off all this food we ate over the past two weeks!)

So it’s off to work tomorrow (Monday, 6 August) where I’ll be spending some serious time over the next few weeks, so it may be awhile before my next update and frankly, it may not be quite as exciting … BUT I promise to tell you about the driving, honestly!

Tracy (Jones) and I spent our first two weeks trying just about every Indian food item we could. Tracy has been ‘mostly’ vegetarian except when her parents were here. She’s also gotten me into the habit of using hand sanitizer at appropriate times and I’m learning to not touch my face at all. We’ve been very careful about what we’re eating – mainly from the standpoint of generally avoiding street food, eating in established hotel restaurants (except at work and in Agra) and sticking to items that are cooked so as not to inadvertently take in the tap water from vegetables that may have been rinsed in it. We are also only drinking (and brushing our teeth with) bottled water (interestingly enough, mostly Aquafina).

Last Tuesday night (31 July), after a day spent in a quality workshop, we had dinner at the Holiday Inn with a couple of colleagues, one from our office in Gurgaon. They were very impressed that we knew all the names of the India cuisine (and in particular, Avial, a specialty Kerala dish)!

On Wednesday afternoon (1 August) we flew to Delhi, where we checked into the Westin, Gurgaon Center. Since both Tracy and I are Starwood Platinum members, we got upgraded to amazing suites. Both were identical but on different floors. The suite had a large living area with a desk and a beverage area with an espresso machine – cool – and a small bathroom off the entry way. The room included an entertainment area with a DVD and other electronic toys. The fairly large bedroom had a king sized bed, but the bath area was amazing! There was a bathtub that was nearly as large as Val’s hot tub (only oval) to one side of the large room that also had a separate shower, toilet and double sinks. Honestly, the bathroom area was larger than the bedroom!

Gurgaon is quite near Delhi (the capital of India) just to the southwest, but it is sort of like a really large industrial complex. According to our driver, 10 years prior, the area was nothing but trees. There was a small village, but the drive between Delhi and Sohna was not safe with lots of bandits. Now that it’s been industrialized, the road is safe, or so the driver told us and we have no cause to doubt him. When we were coming into Gurgaon from the airport, it was dark and it looked like we could have been in Anywhere, USA, with lighted signs on new office buildings marking Sprint, Deloitte and other well known US companies.

By the way, the blackouts that took place in the north occurred just before we got there. It didn’t impact us while in Kerala except for several instances where the power went out momentarily. This also occurred several times while we were in Gurgaon, but not to the extent that it had. So clearly, as we all know, timing is everything!

Our meetings in Gurgaon got moved to Friday, so we decided to take Thursday and see the Taj Mahal. It will be an early day as it is a long drive to Agra!