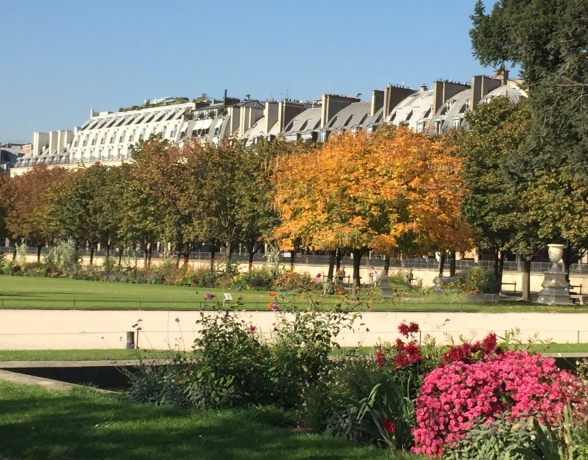 April in Paris is a remarkable time when new leaves are coming out and the spring sunshine begins to lure the flowers from their sleep. As the days brighten and the rain comes, warmer days beckon you outdoors and into parks and walking paths.

October is like April in reverse. Flowers are blooming, although the variety has changed. The leaves on the trees are darker and older and are thinking about their upcoming change.

Walking through the streets of Paris, you see the shadows lengthen and wish you’d have thought to bring a hat or a scarf to fend off the chill. Then you stop for lunch at a sidewalk café and by mid-afternoon you’re thinking of taking off your jacket.

With a month in front of us, and many visits to Paris behind us, we focus on destinations not listed in visitor guides. We talk to locals about where they shop and places they love to help us determine out-of-the-way locations.

We’ve chosen a flat in the 10th Arr, three blocks northwest of the Place de la République. It places us north of the main tourist sites and further into local territory. We’re shopping at markets and stopping at cafés where fewer workers speak English. It provides us with an excellent opportunity to improve our French.

Our first major food shopping excursion takes us to the Marché Saint Quinten just off of Bd Magenta where vegetables for the week cost us €11,20.

On a warm sunny day during the early part of our visit, we set out for the Canal Saint Martin, located just a few short blocks from our flat. This early 19th century waterway was ordered by Napoleon I to supply Paris with fresh water. Canal boats also brought freight as well as food into the city. The canal links the Seine, just behind Notre-Dame cathedral and ends at the Parc de la Villette. The street that runs along the canal is lined with Chestnut trees, and elegant footbridges enable you to cross over to the other side. Locks are present where needed to allow the boats to traverse beneath the cast iron footbridges.

Cafés, art galleries, boutiques and funky shops line the streets on the western bank of the canal, although not too many tourists can be found. Mallards swim casually through the water as people sit alongside reading books or eating lunch.

We stop at La Grisette, a lovely little café for escargots and pizza. You may think this an odd choice, but my friends from Taiwan don’t have many opportunities to enjoy pizza, so that’s our lunch on this fine day.

If you cross over to the east side, you can follow Avenue Richerand to the Hôpital St Louis. Erected in the 17th century to house plague victims in isolation from the rest of the city, it has a lovely, large and elegant square hidden on the grounds. We take advantage of the detour and discover that the square is hidden quite well. Being a rather formidable hospital, it takes us awhile just to find an open entrance to the grounds. But we persevere and eventually find our way inside the square with its wonderful large, old trees and beautiful circular garden in the center. Rather nice, actually.

Of course, there are always favorite places in Paris that we just can’t miss.

Located in the 13th Arr a short walk down Rue Bobillot from the Place d’Italie, this area used to be a separate village outside of Paris. Cobblestone streets and smaller private homes with modest gardens offer a less urban feel in an area more intimate in scale.

Other restaurants along Rue de la Butte aux Cailles include Le Temps des Cerises, an old-fashioned workers’ co-op popular with the locals at #18 and at #13, you’ll find the Taverne de la Butte as well as Des Crêpes et des Cailles.

As you wander through this village-like setting, make sure you head down the cobblestone passage Barrault off of Rue des cinq Diamants and turn right at the end heading up to Bd Auguste Blanqui to the outdoor market with its tempting array of produce, cheese and other traditional French fare. The market is open on Tuesday, Friday and Sunday.

There are several places in the 5th Arr on our list to visit during this trip. On a beautiful, sunny afternoon, we walk from the Place de la République down the Bd du Temple into the Marais.

We’re interested in visiting the Musée Carnavalet, listed as the “oldest of the municipal museums” and containing the historical legacy of Paris. While essentially a history museum, we’ve read information about it that states that it’s an art gallery exhibiting mostly original works “in keeping with the genius of Paris.” With beautiful gardens and rooms filled with historical furnishings, the Musée Carnavalet sounds like a wonderful stop on a sunny afternoon.

Perhaps, though, we should have checked their website before walking here, as the museum, located in two town houses, is currently in the midst of a major renovation that will not be completed until the end of 2019. So, we shall keep it on our list for a future visit.

Not to be deterred, we continue on in our quest to view other places in this area previously not seen. Walking further, we stop along Rue Francois-Miron in front of two of the oldest houses in Paris. The buildings, constructed in the 14th century are half-timbered former inns. In this city of stone, they are rather remarkable in their uniqueness.

A short walk later, we arrive at the Musée des Arts et Métiers, a rather amazing and very large museum partly housed in a very old church complete with stained glass windows. Dedicated to technological achievements, scientific instruments and industrial design, complete with renditions of famous bridges, automobiles, computers, cameras and the like, the vast quantity of objects makes for a fascinating tour. In the church, there’s a bi-plane hanging from the ceiling of the dome and a Foucault Pendulum swinging slowly in the entranceway demonstrating the rotation of the Earth. 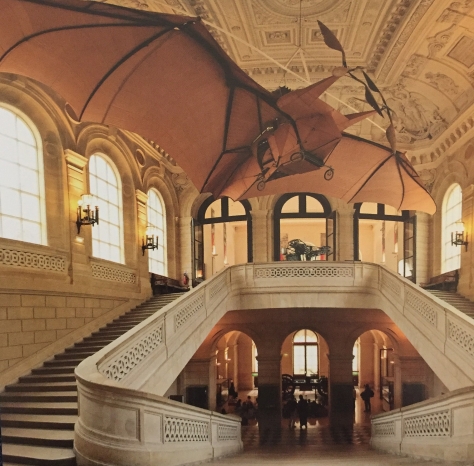 October is proving to be a lovely time of year in Paris. The temperatures have been cool in the mornings and in the low to mid-70s by mid-afternoon. The trees are just beginning to change and it’s a wonderful time to walk around the city.

5 thoughts on “Autumn in Paris”