When I was here last August, my UK colleague, Scott, told me about this place. He showed me some amazing photos of the elephants getting bathed in the river and recommended that I add it to my list for my return. So, when Marion, my US colleague who was here for several weeks, said, “What shall we do this weekend?” I immediately thought of this.

Along with several other teammates, we met at the Holiday Inn and in two cars, started off toward the sanctuary, which lies 45 km northeast of Cochin. The drive was quite beautiful as we passed through small towns alongside rivers with lovely mountain views in the distance. As is the case with travel in India, the traffic and road conditions meant that the approximately 28 miles took us about an hour and a half.

In days gone by, Kodenad was one of the largest elephant capturing and training centres in Southern India. In 1977 (not so long ago, really), the capture of elephants became illegal, but the elephant kraal and training centre still exists as a reserve and sanctuary for these remarkable animals.

The energy of the darkened wooden training ‘building’ was heavy with the echoes of the past. The thick wood and ghostly interior was rather frightening. But right next to it stood a couple of babies covered with thick, prickly hair that made them look like baby mammoths. Very cute they were!

An edge of the training centre 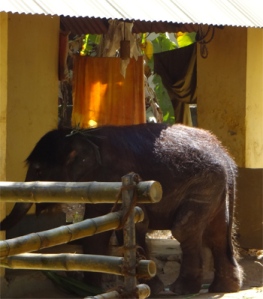 Several of us were fortunate enough to take a ride on one of the six very large elephants set up with ‘saddles’ to carry passengers. One of our group saw the elephant being led away, presumably for lunch, and ran up to ask if we could have a ride. So back they came and three of us walked up the metal stairs and climbed on board. I tried to envision riding on one of these immense creatures for endless miles across India in days gone by. The heat, the shifting and exaggerated rocking, the slow, deliberate movements was not something I would have wanted to do for long distances, but the experience was tremendously exciting. 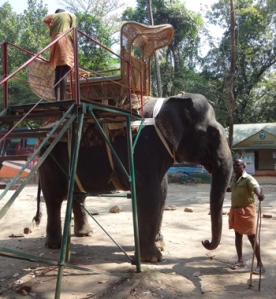 The elephant is the state animal of Kerala and they are used quite frequently, particularly in temple festivals. There’s actually a famous Elephant Palace, the only one in the world, near the Guruvayur temple in Punnathurkotta, that houses the temple’s 60+ elephants. There are also famous elephants, many made famous by the numbers of people they trample … go figure! I was told by my Indian banker that if you search for famous Indian elephants, you will find many reports of the famous and not so famous. So I did, and found this interesting site: Colors of India. They should probably reconsider their choice of color used in their text, but it does provide some interesting facts.

While I was staying in the hotel, I was fortunate enough to see a Temple Festival parade that included two very large, male Indian elephants robed in glittering gold with bells and lavish necklaces. People holding tinseled silk parasols and peacock feathered fans swayed back and forth as the elephants moved slowly forward to the beating of large drums. At one point, fireworks went off, but the elephants didn’t blink, clearly used to it (although I nearly fell out of the window).

So, back to the Kodenad. If you get up really early and get to the sanctuary in the morning, you can actually help bathe the elephants as they are taken to the river and brushed and washed by their handlers (called mahouts or pappan in Malayalam, the language of Kerala). We, of course, were lucky to make it by lunch. But we had a lovely time and, what can I say … I got to ride an elephant!!