After moving from the Le Meridien (no more rooms available) to the Holiday Inn (in retrospect, a nicer hotel, but no Starwood points 8-), I moved into my flat this week.

It’s located on the backwaters with Bolgatty Island the only piece of land separating me from the sea. I can see the Port of Cochin from my balcony and the massive ships that come in regularly. One such ‘cargo carrier’ moves back and forth all day and night from the Port to the North side of Bolgatty island on the backwater side. It’s carrying containers that have been off-loaded from ships that can’t travel the more shallow waters of the backwater. Now that there’s a new road that connects Bolgatty Island with the city, the containers can be lifted from the carrier to trucks that will take them to their final destinations.

Behind my building is a bird sanctuary, so lots of green, but I can only see a portion of it from the ladies health club on the 14th floor. Next to the sanctuary is the fisheries department and the National Institute of Oceanography.

The flat is not in the building I originally looked at last August, as none were available. While this one is on the same road, the other was closer to shops and within walking distance of restaurants and markets. There’s a walkway out front that runs by the water that should be completed in the next month or so. It will connect the walkway that started in front of the previous building, so I’m hoping I’ll be able to walk down to the shopping area at some point. I’ve been told that it would be unsafe for me to walk along the road, and so, I’m trusting my colleagues’ instincts and use my driver when I have a need to go somewhere.

As colleagues arrived this week from the US, it took me until Friday to find the time to go shopping for some of the things that weren’t included in the furnished flat. Things I needed were towels (I had one), dishes, flatware, kitchen knives and other cooking utensils, frying and sauté pans (a couple of pots were left), glasses, coffee pot, tea kettle and hairdryer. To be honest, the two biggest things were the hairdryer and coffee pot, although I’ve been drinking mostly tea since I’ve been here. And, it’s a good thing I had my hair cut really short, so it didn’t look too terrible!

I also bought some food, so now I can start packing my lunch and actually having breakfast before heading off to work.

Technology has been a real issue, as I don’t have internet connectivity, so therefore, no WiFi at my flat. I met with an internet provider this week and they are starting to work on that. Fingers crossed!

So, I’m settling in, and will be figuring out ways to put my own personal touches on the place. I need to buy a Kerala cookbook so I can begin my training in the fine art of India food. 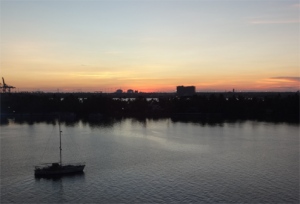 One thought on “Moving week”