We had a great weekend with Tracy’s parents, who arrived on Thursday night (26 July) from Singapore. Bevin arranged for a couple of wonderful outings, including dinner on Friday night at a Kerala restaurant in Dream (a boutique hotel) and a site-seeing tour throughout Kochi on Saturday.

Kochi’s colonial name is Cochin and I haven’t quite figured out when to use which, since it seems to be used interchangeably. When I asked Bevin, he told me that the Indian name is Kochi and the English name is Cochin, so I keep thinking it’s kind of like Mumbai and Bombay.

Cochin is situated on the southwest coast of the Indian peninsula and is the commercial and industrial capital of the state of Kerala, hailed as ‘God’s Own Country.‘

According to http://www.cochin.org/ “This lovely seaside city is flanked by the Western Ghats on the east and the Arabian Sea on the west. Its proximity to the equator, the sea and the mountains provide a rich experience of a moderate equatorial climate.”

It goes on to speak of the “unfathomable diversity and beauty of Kerala, rated in the top three tourist destinations by the World Travel & Tourism Council and featured in National Geographic Traveler’s ’50 greatest places of a lifetime’.”

On our tour of Cochin, we saw the Chinese fishing nets, a seafood market on the water, Jew Town, the Dutch Palace (a museum), St. Francis church in Fort Kochi (the oldest church built by Europeans in India and where Vasco da Gama, who died in Kochi, was originally buried before his remains were taken back to Portugal much later) and Santa Cruz Basilica (originally built by the Portuguese in 1505, destroyed by the British in 1795 and rebuilt in 1905). 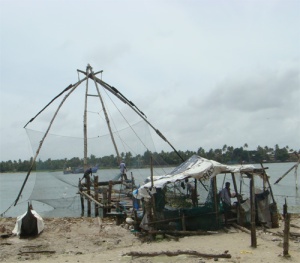 We had a lovely lunch at the Old Harbour Hotel, in the heart of ancient Fort Kochi. A 300 year-old building that was the first hotel of old Cochin and reopened as a boutique hotel. The food is all organic and was excellent.

We’ve had the same driver, Majesh, during our stay in Kochi, which has made things very nice for us as he knows the city very well and he seems to be looking out for us. As part of our tour, and I’m assuming to help support the Kerala economy and the artisans within the city, Majesh took us to a shop that housed 14 families of craftsmen making Kerala-specific products from cashmere shawls to jewelry, clothing and wood products. The cooperative of sorts is subsidized by the government in an effort to support artists. So, we did our bit for the Kerala economy and picked up a few items.

We decided to return to Dream on Saturday night after touring Kochi for the day to have dinner at Mainland China. Touted as authentic Chinese cuisine, the restaurant was lovely and I quite enjoyed the change (although Tracy and her parents – her father is Cantonese – said it wasn’t really authentic).

Tomorrow we’re off to Alleppey and a houseboat ‘cruise.’