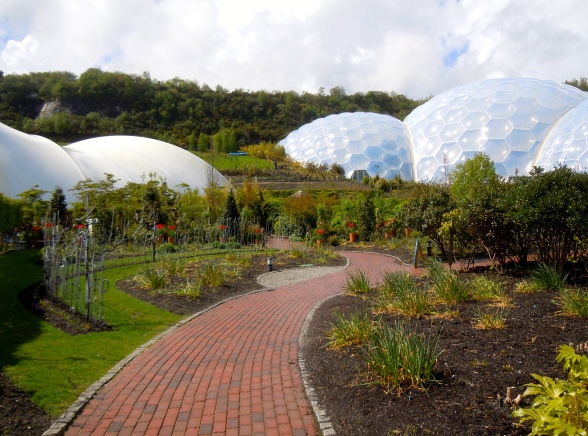 Cornwall in Springtime is just waking up from its Winter nap. Spring flowers are blooming, trees are budding and gardens, nourished from the rain, are bursting forth in all their color and English garden glory.

England is not unlike other industrialized countries when it comes to tapping the Earth for its wealth of rocks, minerals or other substances of which humans can’t seem to get enough. And similarly, leaving behind the desolation and destruction so often associated with quarries or mining. But the Eden Project shows us that the Earth’s scars can be healed. And so on a typical blustery, English day, Mark Stine and I climb into my cousin Derek’s car and with his wife, Cathy, drive the nearly 50 miles from Penzance to Bodelva, Cornwall.

The Eden Project was envisioned about 15 years ago by Sir Timothy Bartel Smit  after he and his colleagues had completed the restoration of the Lost Gardens of Heligan, also in Cornwall. Turning their eye to an old China clay pit near St. Austell, the Eden Project was born to prove that when the land is so violated, it can still recover. And in Eden, it’s been brought back with incomparable success. Upon entering the site, you are struck by the futuristic nature of the giant white pods, called biomes (or eco domes), that serve as the greenhouses. They sit within a theatre of land carved out of the hillside. Walking out onto a viewing platform, you can see the gardens and pathways that will take you to the pods that look other-worldly.

View of the Eden Project from the bridge

The garden paths of Eden

Walking along the pathways, you can almost hear a sighing as this new, positive energy revitalizes the land. The beds of flowers sway in the breeze, weaving from one color to the next in a masterpiece of botanical artistry.

The color of Eden

Sculptures are scattered throughout supporting the theme of a garden dependent on individual aspects of the cycle of life — a large ant, a shiny beetle, a fuzzy bee — all important pollinators and indicative of a healthy environment.

One of the many sculptures

A garden inside a biome

There are two greenhouses, one that contains tropical plants and a rainforest that gets more hot and humid the further up you climb. The other takes you on a walk from the Mediterranean Basin to California (the Horn of Plenty), and from America’s desert Southwest to the hills of Tuscany, with appropriate flowers, plants and ground cover to match.

A garden wall in the Mediterranean Basin

From its conception in 1995, through the final funding in 2000 and onward through its creation (the Big Build) and opening in Spring 2001, the group has been focused on organic sustainability and education. As the sign in the entryway says, “Eden was built in an old clay pit to demonstrate regeneration, the art of the possible and … hope.” With a desire to “inspire people to connect with our natural world” Tim Smit and his team brought a desolate, all but exhausted quarry back to the garden.

Trellises outside of the biomes

This is a place of peace and beauty that is well worth the trip should you find yourself in the glorious countryside of Cornwall.

One thought on “Eden Project: Back to the Garden”