No, not the Lady! As a matter of fact, no celebrity was necessary to bring out the crowds for the grand opening of the LuLu Mall in Cochin, Kerala. Touted as the largest mall in Asia, LuLu opened on 10 March.

On a Sunday afternoon, in a wild and crazy moment, Aswathi, Megha and I decided to go see what it was like. Hey … we did wait a week! But, clearly, we needed to wait a LOT longer!

LuLu has shops on five floors with a total size of 3,900,000 square feet. It has a cinema complex, a 5,000 sq ft ice skating rink, a food court that includes a dozen a half ‘kitchens’ plus three fine dining establishments and parking for 4,800 cars. All of the parking spaces were taken when we got there!! Ha, ha … no wait, I’m not kidding!

It took us about five hours to get in and get out. We were probably in the mall a total of 45 minutes. Most of our time was spent sitting in the car waiting for the traffic to move so we could just get to the corner to make the turn. Aswathi pointed out that many of the cars had license plates that identified them as coming from outside of Kochi.

The entire experience was really just too funny! We kept saying things like, “Aswathi, we’ll just get out here and walk the rest of the way. When we come out, we’ll easily find you because you’ll still be right here.”

When we finally made the turn at the corner, we ended up in another long line which led to the parking garage. We got behind a car that had a sticker on it identifying it as a new purchase. There was a little rise in the road as we entered the LuLu complex and the (presumably) new driver kept stalling the car to the point where three security guards rushed up and began pushing on the back of the car so it wouldn’t roll backwards into ours. We would have moved out of the way, except there was nowhere to move to!

About an hour later, we finally pulled into the parking garage, wondering why we were still doing this, but really, where else were we going to go at that point. Once you’re in a queue like that, there’s just no chance of getting out of it, so you just go with the flow!

So the big to-do at LuLu is their hypermarket, which is a huge grocery on two floors. But we plowed our way through the crowds in the opposite direction, as it was at capacity when we came up the escalator and found ourselves deposited directly in front of it. The five of us (Aswathi’s daughter and her mother were also with us) grabbed hands and wove our way through the crowds. I led the way and felt like a salmon desperately trying to swim upstream.

At this point, I can’t really tell you what the hypermarket has, but I can tell you that all of the grapes vanished on opening day and none of them were actually sold! It seems that everyone was taking a taste … but they were just taking one grape … what would that hurt? Well, apparently there were so many people taking ‘just one’ that all of the grapes disappeared pretty quickly.

I doubt much got sold on the opening weekend, except perhaps in the hypermarket. The weekend we were there, although it was very crowded, the shops were fairly empty. People were just looking around; doing some window shopping and taking lots of photos. And in the midst of the chaos and charm of the largest mall in Asia, we saw a number of young lads (early 20s perhaps) wearing sunglasses and ‘striking a pose’ in front of signs like Marks & Spencer. Seriously! And this particular shop wasn’t even open yet! 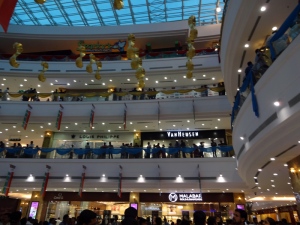 We did stop on the top floor at the ‘food court’ to have a quick coffee, but they were pretty nearly out of everything and all Aswathi and Megha managed to bring back to the table we were desperately trying to hang on to, were two diet cokes, a juice drink and a Sprite.

When we left it was about 8:30 p.m. and traffic was still pouring – well, really, creeping (very, very slowly) – into the lanes for the parking garage. I said, “Well, that was fun!” to which Megha replied, “I’ll come back in about six months.”

Outside – a changing wall display

6 thoughts on “GaGa over LuLu”